Here in this image from HSU ceremony 2008, you can see the master's hood and the doctor's hood.

As the ceremony for finishing my master's program edges closer, I've become curious about the history of its pageantry and costuming.

For this ceremony, I will need more than a cap and gown, now I will need a white hood. White is the color that denotes my area of study -- in the Arts, Humanities and Social Sciences.

The master's robe is different, as well, in the shape of the sleeves. Whereas bachelors' sleeves are pointed, masters' sleeves are very long, with slits for the arms to come through.

I'm also going to need a stole (sash) to indicate that I'm graduating with distinction. I don't know what color yet, but presumably gold. When I was an undergrad, it was a gold honors cord worn around my neck, and for my associate's degree, it was a gold sash.

These outfits, now worn only at graduation, used to be everyday dress for scholars in 14th century English universities such as Oxford and Cambridge. In those days, scholars were clerics and dressed accordingly.

The custom came to America through King's College in New York. It spread, the colors became standardized in the late 19th century, and little has changed since.

Also called a robe, the gown is usually black and is designed differently for each of the three types of degrees. As I mentioned earlier, the sleeves are different, bachelors' pointed, masters' long with wrist-openings, and doctors' sleeves are bell shaped. Doctors' robes have trimmings including colored panels down the front and three velvet bars on the sleeves. Bachelors wear their robes closed, masters and doctors can wear their open or closed.

The hoods, which are separate from the gown, hang down in the back to reveal their satin lining in school colors and their edges, whose color indicates the scholar's field of study. They are long, three-to-four feet, and their length and width depends on the degree earned.

We all know what a graduation cap looks like, so rather than describe it, I will tell you its interesting history. Our modern version is a combination of skullcap and mortarboard.

The skullcap remains from the time when clerics wore their hair cut in a tonsure, shaved on top with a ring of hair around the sides. They wore skullcaps to keep their heads warm.

As for the mortarboard, there was a rule in England in 1559 that clerics had to wear square caps to indicate their profession, and from those early square caps evolved our modern mortarboard (so-called because of their resemblance to the boards masons used to hold mortar in place).

Meanwhile, professors at Oxford began wearing, as a mark of dignity, a skullcap with a point at the top, usually made of velvet. This evolved into the velvet beret professors now wear at commencement ceremonies.

Some universities insist on sober clothing worn under graduation regalia, but HSU has a more relaxed policy.

Also, people often decorate the top of their mortarboards to express their individuality or wear sashes that indicate some affiliation. Native American students and African American students, for example, often wear sashes of culturally meaningful colors. Graduates from the nursing program often balance traditional nurses caps on top of their mortarboards.

I have seen no such group affiliation in the English department, but a friend decorated her mortarboard with a linguistically diagrammed sentence.

When I earned my associate's and bachelor's degrees, I decorated my caps with a brooch that had belonged to my grandmother. What will I do this year?

Here is a pic of graduation 2007 with my professor, adviser and dear friend. 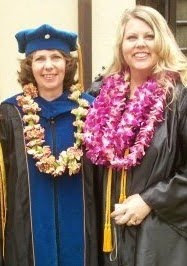 Here is another with several of my classmates from the English Department, 2007. 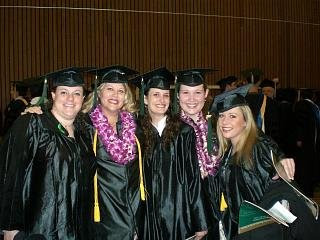 Note: I gleaned much of this information from academicapparel.com which has a good history section with excerpts from academic research articles on the history of academic customs and ceremonies. 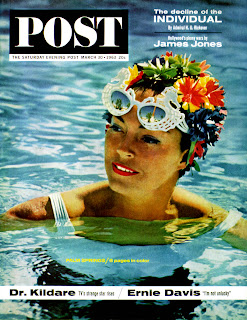 When my youngest son was little, I used to go to water aerobics class to work out in the water. Any excuse to get in a pool; I seriously love to swim.

I didn't know anyone, so I just minded my own business, exercised against the resistance of the water, enjoyed feeling strong and buoyant, sunshine on my hair, the scent of chlorine in the air.

Well, I didn't entirely mind my own business, because I spent a fair amount of time eavesdropping on the conversations of two little old ladies -- and daydreaming about their lives.

They were schoolteachers near retirement who came to the pool to exercise, best friends from way back, and they were always full of stories of places they had just traveled. It seemed like they were always just getting back from somewhere.

Greece. Australia. A cruise through the Caribbean.

I never talked to them. I never even knew their names, but I listened to their stories. I wanted to be like them -- confident, secure, with a best friend by my side, adventures ahead as well as behind me.

It was in that pool that my dream of becoming a teacher was born, not of selfless desire to help people or spread knowledge, but to work nine months a year and travel all summer.
Posted by Indie at 11:52 PM 6 comments: 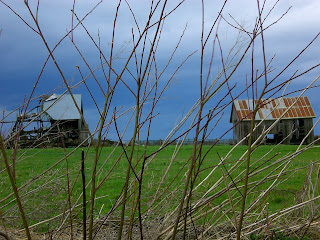 Youth, with its insupportable sweetness,
Its fierce necessity,
Its sharp desire,
Singing and singing,
Out of the lips of silence,
Out of the earthy dusk."

I read this today and wanted to share it with someone. I like the juxtaposition of the tired unrelenting world against the bright energetic flash that is youth.
Posted by Indie at 2:29 AM 4 comments: 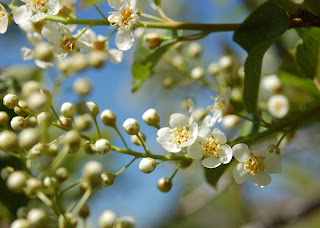 Beautiful spring image courtesy of lh4.ggpht.com.
Today I can finally breathe again, after a bout with pneumonia. I am on day three of antibiotics and day eight of being cooped up in the apartment. No more fever, and I can finally feel little stirrings of energy and determination and hope.

I have not enjoyed good health this winter, and the reason is stress.

Stress is such a 21st century word, so businesslike and modern. Sibilant as a sigh -- which is very misleading. It should be a long, garbled string of hard consonants, in my opinion, something better befitting its monstrous and deadly nature.

It makes us ill, but that can be a blessing in disguise. I had eight days of forced solitude and inactivity -- a little time out. There was nothing to do but feel terrible, rally the energy to take showers, make glasses of juice and take medicine --- and notice what my life has become.

At this point, you probably want me to explain myself. Let me just summarize by saying that it become filled to overflowing with things that are not life-affirming.

One of them, unfortunately, is graduate school. A mistake, a miscalculation, a black hole for everything that matters in my life, it eats all my time and energy and gives absolutely nothing in return. It leaves me with no time to earn a living, no energy for my family, and no inclination for seeking happiness and love.

Yet, I'm only two months away from graduating, so I have to see it through. I have to look at what remains of it and try to get it done. In May when I graduate, will I celebrate it as an accomplishment? I just don't know.

Another thing that has taken more than its fair share of my life force lately is the love I have been completely wasting. All the humiliating events of the last few months haven't shaken me out of it, but spending several days alone sick finally did.

I realize that our real friends and loved ones are the people who check on us when we are ill. The rest are just people we know.

So now that the antibiotics have begun to kick in and I am looking at resuming my life, I want to live it in a way that will keep me healthy. I won't be pouring my precious life energy into anything that doesn't enrich me or my family or the world.

I started this post thinking it was going to be an extended metaphor about pruning the dead or life-draining parts away, something I have posted about before here at the Bitten Apple. I searched the archives for that post and, to my surprise, I discovered it was written almost exactly a year ago, March 18, 2009.

So maybe this is something that just happens to me in the March, like spring cleaning.
Posted by Indie at 2:00 PM 7 comments:

I write this through a fever haze that seems to affect the touch of my fingers on the keyboard. If you see a misspelled word or misplaced punctuation, be lenient with me today, please. I have the flu.

It has been nearly a month since I last posted, tantalizingly announcing the existence of three secrets to be revealed. Here is one:

That thesis, that 80-page behemoth that I labored over through the winter and despaired that no one would ever read, that thesis has been nominated for an award!

This has renewed my faltering interest in my thesis and renewed my determination to finish it. I also had to write a 1,000-word summary of the project, which was an excellent exercise in refocusing my energy.

Just the nomination means I will graduate with distinction, which was my highest goal. So I don't even need to win; this makes me very happy.
Posted by Indie at 7:46 PM 15 comments: