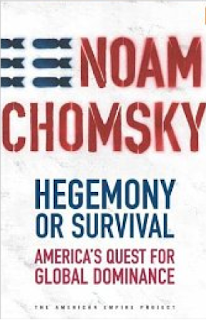 It's only thanks to Chomsky that I even know the word "hegemony"
This morning, I visited a blog, Sey-Gep Hes, and read a post ("One of the Most Bizarre Cultural Practices in All Human History") that discusses race issues from the point of view of someone who is part Native American.

In addition to having a lot of interesting things to say, the writer was discouraged that he's gotten few responses to his previous post, "Going White," since the stated intention of the entire blog is to find "real dialogue."

So I responded with my views on the relative perceptibility of cultural hegemony to those who occupy the status quo, that it becomes more visible when it is shifting somehow or when one's place within it is shifting.

Wikipedia defines cultural hegemony as ("a philosophic and sociologic explanation of how, by the manipulation of the societal culture (value system), one social class dominates the other social classes of a society, with a world view justifying the status quo of bourgeois hegemony."

Anyway, here is what I wrote:

I completely understand the desire to spark discussion through your blog posts. Your analysis is thoughtful, and because of its length, could seem so thorough that readers may be unsure where to jump in, which of your many points to respond to.

I haven't yet read the original "Going White" post, but my first response is this:

Number of comments is not an indicator of how many sets of eyes read your words, how many minds are now ruminating with thoughts inspired by your thoughts, or how many lives or attitudes shift ever-so slightly as a result of interacting with your writing.

This is the beauty of published writing; it goes out there, for a short while or long depending on the medium, and resonates in ways the writer can't measure or control.

So let me think awhile about matters of race and white supremacy. I'm white and only become aware of it when someone brings it to my attention (the very definition of white supremacy). As an academic, I've thought and written about it in depth, but the nature of hegemony is that it's invisible to anyone who fits the bill.

Therefore, as a white woman, I notice gender issues more than race, the pressure to meet a societal standard and the assumptions I encounter as a woman, the limits and also the advantages of being female in our society.

And as a later-in-life college grad who for the first time in my life has employers vying (with money and status) for me, I am lately thinking about issues social and economic class. As opportunities arise to change my place in the class structure, they bring into focus my class values.

For example, as the question of buying a new car comes up, I notice I'm actually more comfortable with an old beat-up truck-- that actually, in my mind there is higher status in what a beat-up truck says about you than what a shiny car says about you.

And a shiny diamond ring on my finger would mean someone else is taking care of me, when in truth I take care of myself and am proud of that.

Voila, I had no idea until lately that I even felt this way.

So maybe hegemony gets more visible as things change. If white people start talking about race, I think it's an indicator that things are shifting. For example, the formation of a prominent group like the Tea Party seems like an indicator that the white-centric way of life is on the wane.

It took me a long time to start recognizing conservative vitriol as the ravings and gnashings of a cornered animal, but I believe that's exactly what it is.

So in a climate in which attitudes are shifting, at a time when the internet makes self-publishing possible, I think it's very important to have the thoughtful articulate writers like you addressing subjects like race, questioning hegemony and offering insight that allow others to question it as well -- in ways that are significant to them.

Thanks for giving me a chance to think about these things.
Posted by Indie at 3:18 PM 1 comment:

The Hunger for a Good Read 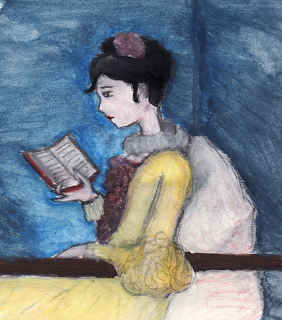 All I really want is something good to read, but you'd think I was asking for the moon. After dabbling in the precarious stack of books by my bedside, I finally read one that caught my attention, The Hunger Games.

In fact, I then quickly read part two of the trilogy, Catching Fire, and ordered the third, Mockingjay, within minutes after reading the last page.

It seems strange that, after a master's-level study in English, the only literature that can hold my attention is Young Adult Fiction. And apparently the zeitgeist is in agreement, because according to Courtney at Blake's Books in McKinleyville, it's mostly adults reading this trilogy.

While I wait for Mockingjay to arrive, I browsed Blake's literature shelves for something to pacify my mind in the meantime. I rejected book after book with the most curious rationales: too psychological, too didactic, too long, too much of a commitment.

Hidden somewhere between those "too"s is the reason why I and many others are turning to young adult fiction. Like an angst-filled teenage girl, I want escapism from my fiction, a trapdoor to a world other than my own.

But I don't like things that are light and airy; I need to feed my dark side, so I like to escape into grittiness, dystopia, murder mysteries, psychological thrillers-- but they have to be well written.

To be fair, I have to admit I also like falling into lyrical well-written books such as those written by Alice Hoffman (I've read every book of hers) or Lawrence Durell, who writes:

"Perhaps our only sickness is to desire a truth which we cannot bear rather than to rest content with the fictions we manufacture out of each other." (from Clea, one of the Alexandria Quartet)

But there are precious few writers who can engage me, and I fear it's only going to get worse:

I heard a disturbing piece on NPR this morning about Amazon directly publishing Kindle titles and some company called Wowio that sells ad space in e-books. The reporter said, "Americans have accepted the quid pro quo of viewing ads in exchange for receiving low-cost or free content." (I'm paraphrasing).

So now, mediocre authors can easily get published on Kindle, neatly side-stepping any quality review they would have gotten at Random House, etc. And at the same time, Amazon publishing will be motivated to find content--any content--to surround those ads.

It seems literature is headed the way of journalism, where the news is just grey stuff to fill in the space between ads or just sensation to appease the sponsor.

For a reader just looking for a good story to escape to and some decent writing that doesn't jar her sensibilities, this is bad news indeed.

Meanwhile, as YA fiction continues to thrive, this article in the LA Times attempts to explain why adults are turning to YA fiction. One source in it speculates that the reason is that "there's no bones made about the fact that a YA book is explicitly intended to entertain."

And yes, later on, I will read Moby Dick.