Image courtesy of toomanybookstoolittletime.wordpress.com
I'm reading Year of the Flood by Margaret Atwood. I discovered quite by accident that there is a sequel to Oryx and Crake, that that unsettling ending isn't the end of the story after all.

As with Stephen King (sorry, Margaret, for comparing you to such a mainstream author), I have discovered Atwood's formula. But instead of making me lose interest, this discovery has made me see science fiction wherever I look.

While King creates horror by first making the reader completely recognize the characters and setting (thus bringing the unspeakable horror "home," so to speak), Atwood takes objectionable recognizable things from around us and imagines the worst possible outcome-- X, whatever it is, to the nth degree.

In A Handmaid's Tale, for example, she takes government control of women's reproductive systems and says "what if this got much, much worse?" In Oryx and Crake, she takes commercialism and anti-intellectualism and says the same thing.

Reading her work, you suddenly recognize, in case you missed it, that you are actually living in a dystopia. It's right here all around us, fueled by mass media and the information age, and it isn't destined to get any better any time soon. That's Atwood's formula for horror.

I once heard a science fiction author speak and she said "Science fiction is inventing the future." The dystopic subgenre of science fiction, playmate of horror, operates as a warning--- but does anyone listen? Do we have to invent such an ugly future?
Posted by Indie at 6:56 AM No comments:

Why It Takes Me Awhile to Write a Presentation

Because nothing is simple in my mind. Work assignment: write a presentation.

(Image courtesy of chemistryland.com)
But first, these types of thoughts have to run through my mind and find a place to settle along with the task at hand.

Drawing on this analysis, we highlight the emergence of what we refer to as corollary genres that challenge our conventional understandings of genres as tightly coupled to particular recurrent situations and communicative purposes.

Our analysis points to an empirical blurring of genre expectations around conventional discursive practice, suggesting important implications for the nature of workplace communication in contemporary organizations."

-- From "The PowerPoint Presentation and Its Corollaries: How Genres Shape Communicative Action in Organizations"

Labels: a day in the life, business writing, work 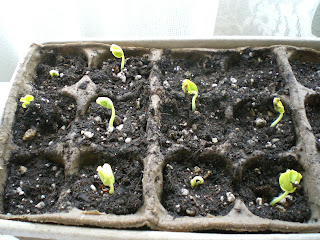 These little sprouts were hibiscus starts by the time I transplanted them today.
Thank goodness Spring has arrived.

In hopes of Spring, a folded away the down comforter and exchanged it for a fresh cotton quilt. When I pass through the room and see the expanse of this quilt and the sheer white curtains dancing above it in the breeze, I want to lie down and daydream.

In hopes of Spring, I set out for the day in a t-shirt and shorts. By the time late afternoon rolled around, I had to add Uggs to this ensemble. Shorts + Uggs = hope+ reality.

In hopes of Spring, I got on my knees and planted pansies and impatiens, little emblems of instant gratifications as I wait for the herbs in my flowerbed to grow larger. And I secreted bulbs under the ground like Easter eggs to find next spring.
Posted by Indie at 12:05 AM 1 comment: