Once upon a time, vanilla was my term for anything ordinary, mainstream or unembellished. I used the word disparagingly, with contempt for all things that swam downstream or failed to stand out.

But that was before I understood vanilla. Vanilla, my friends, is anything but ordinary. In fact, vanilla is exotic, legendary and downright sexy.

Did you know, for example, that a vanilla bean is the fruit of a gorgeous, curvaceous orchid that only grows naturally in the tropics of Mexico, where it has a delicate, symbiotic relationship with a certain vine and a certain bee?

Image courtesy andesamazon,org
Anywhere else it manages to grow nowadays, it is being pollinated by hand. This high-maintenance substance is the second most expensive spice next to saffron. A single vanilla bean costs about $3 in Safeway, but aficionados can find more affordable options online. 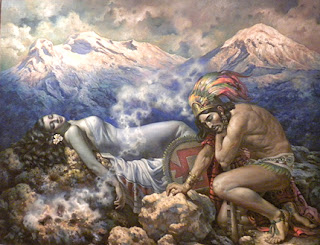 Image courtesy of the National Museum of Mexican Art
Local legend in Mexico says that the first vanilla orchid sprang up from the shed blood of a heartsick princess. Old medical texts call it an aphrodisiac, and modern science tells us it is possibly even addictive.

Hernan Cortes, image courtesy Wikipedia
Vanilla came to Europe at the hands of a conquistador. It was an adolescent slave-boy who first thought to try hand-pollinating it, thus making it possible for us here in the US to be cavalierly adding it to our cookies and ice cream today.

Last year at Christmas, my sister put a single vanilla bean in my stocking, encased in a small, glass spice jar.
It took me an entire year to get around to making my own vanilla extract, which I did last night.

Last night was my first tactile, sensual experience with a raw vanilla bean. When I opened the spice jar, the powerful creamy aroma burst into the room and settled in my hands and hair. I can still smell it in my apartment this morning.

I had a wide-mouth jar of brandy, sweetened with agave nectar, ready and waiting when I took the long brown vanilla pod from the jar, marveling at its pliable texture. I split it lengthwise to reveal the dark mass of pulpy black seeds inside.

I dropped the opened bean into the sweet brandy and sealed the jar tight. It's now languishing in the dark cupboard for the next few weeks until it's ready to use.

What I really want to make now is vanillinsocker (vanilla sugar), an amazing substance I discovered in Sweden while making whipped cream for pankakor.

Vanillin socker is strongly aromatic powdered sugar used in baking the way Americans use vanilla extract and the way Germans use vanillezucker, which is vanilla scented granulated sugar.

I recently used the last of the canister of vanillinsocker I brought back from Sweden in 2009 and I'd like to replace it with a natural handmade substitute. So that's going to be my next endeavor.

I'll let you know how that goes.

In the meantime, please read the ingredients carefully on the package of vanilla you are using, whether it is extract, socker or zucker. Avoid artificial flavorings of any kind, which seduce and inure our tastebuds with falsity and aliencate us to the delicate flavors nature has to offer.

Check out the nanofoods section of PBS' "Need to Know" page to see how widespread chemically engineered flavor enhancers are going to be in the coming years.

When it's so easy to buy a bottle of vanilla, using a bean is so decadent and so amazing. I buy one (or if feeling WILD with a Penzey's catalog in hand, a tube of three...then hesitate to use them lest they be gone. After making a batch of vanilla ice cream, I put the used pod in a jar of sugar then promptly forgot about it. I found it the other day and you've reminded me to use it...maybe in coffee. Or sprinkled on top of muffin batter. Mmmmmm.

Vaniljsocker in the US, just in case you fail.

Anonymous, you are my hero!! Thanks so much for the link. I can't wait to explore what they have.

The vanillin socker I made turned out great. Unlike the vanilla extract, it seemed to take no time at all to cure and I've already baked with it. The vanilla extract still just smells like vanilla brandy in a jar; I'm tempted to make cocktails out of it rather than bake :)

Thanks again for the link and for taking the time to read my blog.

Your blog is very useful for me,Thanks for your sharing
wordpress
blogspot
youtube
កាស៊ីណូ